When you’ve got the world’s most thrifty, creative, talented husband who also has zero patience you end up with a custom kid’s kitchen in the span of an hour or so (using an old cabinet from the basement and leftover paint!!!) 😍
I am very excited about these heart shaped @mollyyeh challah waffles! Oslo is obvs very intrigued too 😍
🥰
Little dude got his first hair *trim* (he barely has any hair but was getting a wicked mullet) it was so cute!
Volume up. Kids got soul. 🎶
“The days are long but the years are short.” 2019 was both amazing and challenging. Motherhood has a unique way of warping time- some days drag on and on and then milestones flash by your very eyes. I keep this little reminder up on our bathroom mirror with a photo of our family the day after Alden was born. It’s hard to believe he’s already a harmonica playing, art loving, kitty snuggling, dancing machine. This time of year also marks an “anniversary” for Seth and I- we’ve been side by side for 6 straight years ♥️ 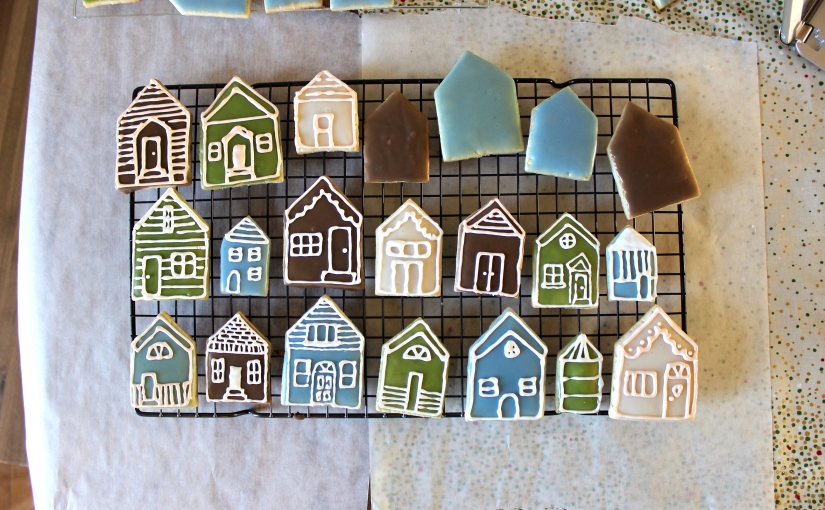 We had a very white and relatively quiet Christmas up here in North Dakota. This year I realized that there are a few things which really put me in the Christmas spirit (besides the obvious classic movies + music):

I had already binge watched The Santa Clause 1, 2, and 3 (don’t judge me) but making a batch of Molly Yeh’s sugar cookies really got me feeling festive. We hosted a few private holiday parties at Dakota Timber Company and one of our parties was for our local Home Builders Association so these little house cookies were the perfect treat.

I realized a few months ago that I only owned ONE cookie cutter! A little bunny one that I got from a thrift store (of course). So I headed to Target at the advice of Molly to check out the new Magnolia Home collection of cutters. These little houses were definitely calling my name and I immediately imagined them all decorated with royal icing in an illustrated style. 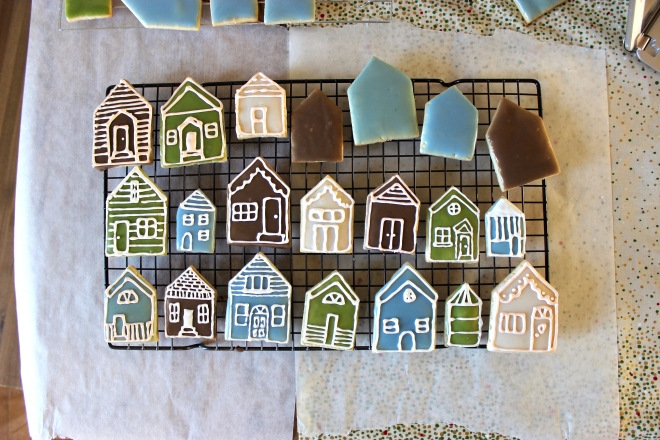 Molly’s glaze recipe is amazeballs. I had so much fun mixing up colors and dipping the cookies and letting the glaze spread evenly over the surface.  I LOVE the way the frosting dries sort of matte-glossy – it was the perfect background for little line decorations. I used Alton Brown’s royal icing recipe and piped line drawings on the face of the cookies – one (okay maybe two) of them ended up looking like grain bins which was not a bad deal.

We had Christmas out at Seth’s dad’s house. It was kind of a special Christmas because our nephew got to spend it with us (which we know probably won’t happen very often since his dad’s a military man and they move quite a bit!).  He did an awesome job as Santa and handed out everyone’s presents while still in his adorable Christmas pjs. Christmas is pretty fun when there are little ones involved. 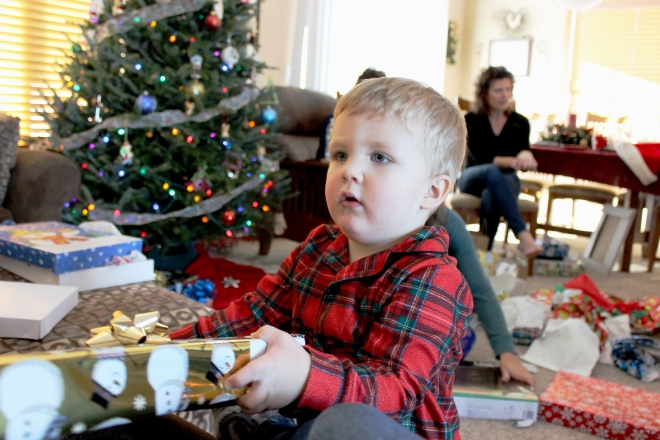 My sister-in-law (who also loves to bake) brought over some krumkrake that she made which was out of this world. Cardamom is the king of Christmas spices if you ask me. Even though I will always love pizzelles + the nostalgia they bring – I definitely have to add krumkake to the repertoire next year. 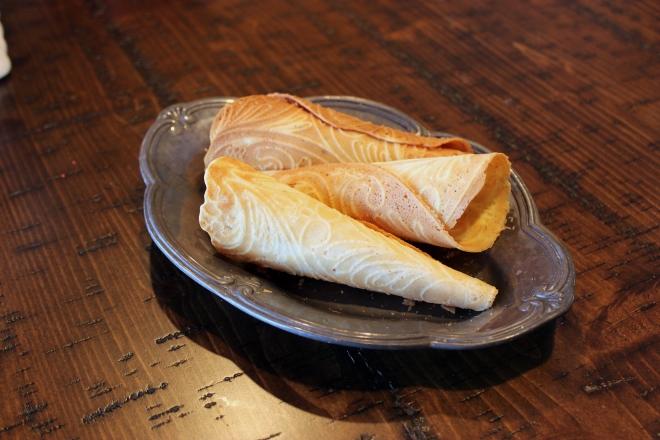 I dubbed Seth the Krumkake King this year… mainly (and only) because I took this ridiculous picture of him in his new Christmas socks munching on a cone. That might have to be a thing next year too- whoever can eat the most krumkake can be the Krumkrake King!

Does doing something two years in a row make it a tradition? Probably not… but this is my second year making lefse with my dear friend Alex who is definitely a seasoned pro. The tradition has a long history in his family and he has been making lefse – the Norwegian dessert made from potatoes and topped with butter + sugar – since he was probably old enough to hold a rolling pin.

Alex was kind enough to share the tradition with me again this year and Randi joined in on the fun. She will be sharing highlights from our magical lefse making night on her podcast along with Alex’s grandma’s recipe in the new year!

There’s something magical about baking during the holidays.  I think the magic gets elevated when you are making something that you know has been passed down for generations and when you are sharing those traditions with friends. Even though I didn’t grow up eating lefse during the holidays (I had NO idea what it was before moving to Fargo) I have grown to love my little “potato tortillas” during Christmas time.

Alex packed up his family lefse supplies, a special griddle, lefse sticks, lefse/pastry board, and fancy rolling pin and we headed to Randi’s to start the marathon of rolling and flipping and folding that is lefse making! 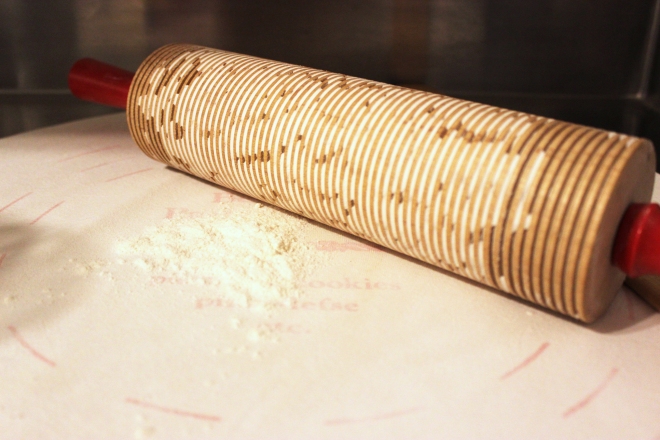 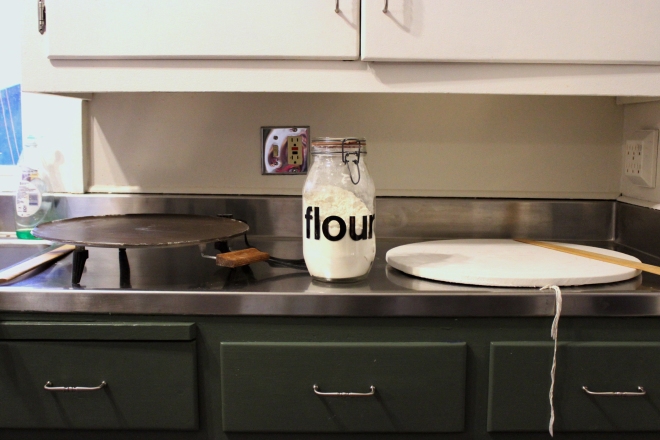 Alex had already prepped the potatoes for the lefse dough – a process that involves boiling, ricing, and letting the potatoes cool. He brought two huge bowls of prepped potatoes that we had to finish turning into dough which involved adding flour, mixing well, and rolling up into cute little balls. 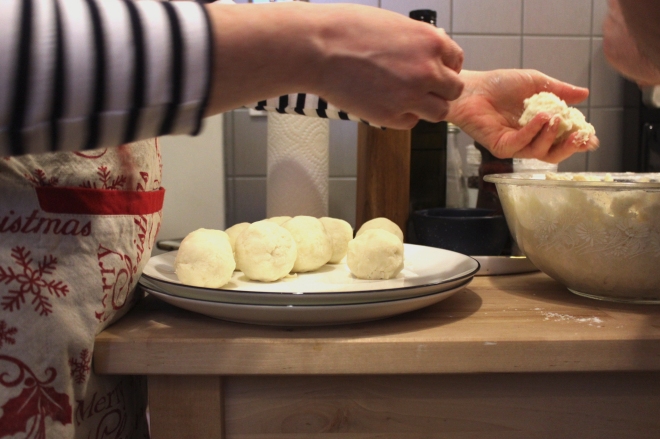 Although I know that you can definitely make lefse solo (I am pretty sure that Alex has made a million pieces of lefse in his life, probably a ton of which he did all on his own) it is so fun to do with friends! 1. You can all wear your favorite Christmas aprons and 2. You can take turns forming the dough into balls, rolling out the dough, flipping, and folding and basically form a little mini assembly line.

Rolling the dough nice and thin and flipping the delicate pieces of lefse on the griddle are probably the hardest parts but with a little practice Randi and I were doing pretty well by the end of the night. Even the mess-ups were fun though because we justified eating those pieces straight off the griddle (which is hands down the BEST way to eat lefse!). 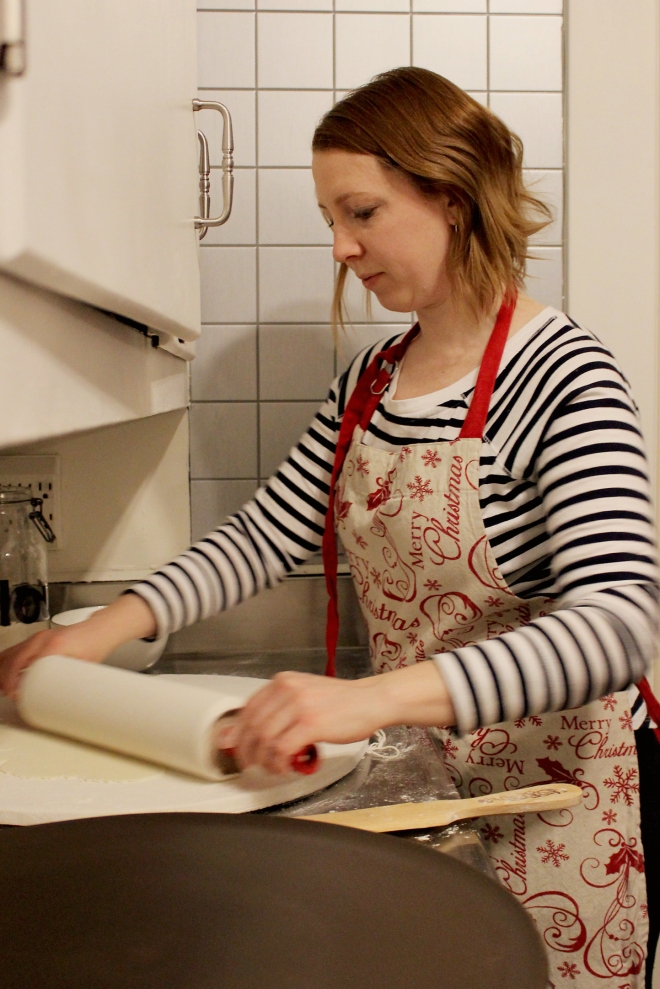 When you listen to Randi’s podcast of the night you’ll likely hear the fun we had trying to guess what each lefse shape looked like. There were a lot of old witch/troll faces and random countries that I am pretty sure we made up. None of them turned out perfect but that is the charm of homemade lefse.

Randi’s ridiculously adorable pup Junebug kept us company while rolling. She just always has to be where the action is at. With a fire roaring in the other room and plenty of Christmas tunes playing it was the coziest of nights.

We ended up with two huge stacks of lefse, all neatly folded and wrapped up in a towel + grocery bag to sweat overnight. In the morning once our lefse cooled we could fold it once more and freeze them. I’ll be bringing mine to our family Christmas where we will let them defrost, slather them with butter and plain white sugar and roll them up to enjoy. 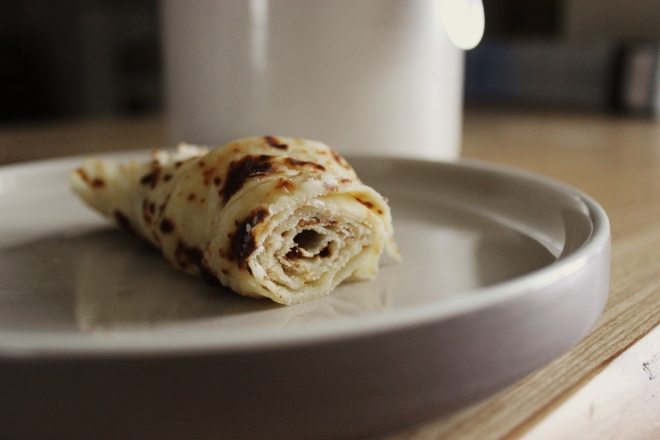 Lefse is a simple little “dessert” (one that I literally laughed at the first time I had it) but once you realize the amount of time and love that goes into each piece it becomes something pretty special. Cooking is a hobby I usually do solo but there’s something to be said about spreading the love and spending time with your friends while making something yummy to eat – especially when you get to share the mess-ups and sing along to Christmas tunes together.