I love beets. My husband love beets. Every time we eat beets we wonder to ourselves, “Why don’t we eat more beets?”. It’s that rich, earthy, dirt flavor that drives us crazy I guess. Hot, cold, pickled, roasted, raw. Ugh, just shut up and give me some beets already!

We also love soup. I take great pride in my soup making abilities and boast the title (bestowed upon me by Seth) of The Soup Ninja. I can literally make soup out of anything but can’t write a recipe for soup to save my damn life. Because really, how the hell do you even write a recipe for soup?! Just keep adding stuff in random quantities until it tastes good… that’s my motto (which should get you really excited about the soup recipes I am sharing today)!

So between our love of beets and our love of soup, of course one of our favorite ways to eat beets is in borscht! Seth (being lactose intolerant… sad face) prefers clear borscht served hot and I’m a fan of cold, dairy borscht with a big fat dollop of sour cream on top.

Last fall I got to dig through my Great Grandma Sally’s recipes and found a recipe for borscht amongst the many other Eastern European/Lithuanian/Probably Jewish dishes she made regularly. 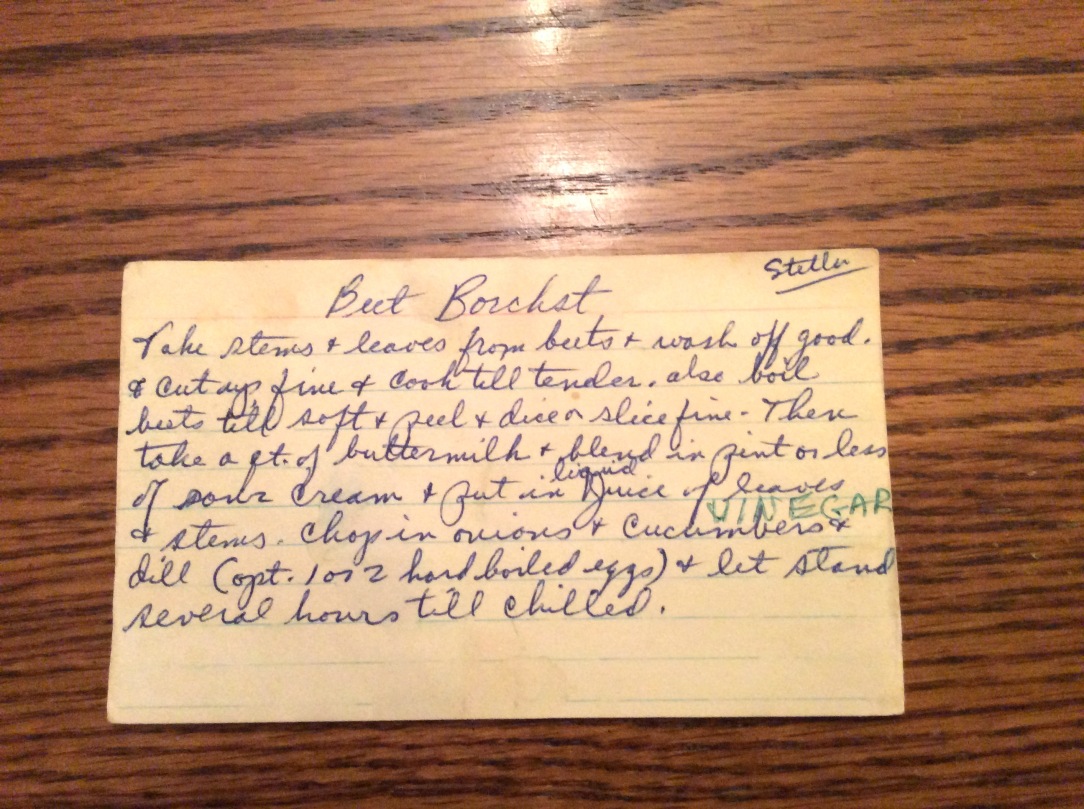 So I find this borscht recipe and I get all excited and then I actually read the thing and can’t help but laugh because it is EXACTLY how I would write a soup recipe. No quantities, vague directions, random additions that may or may not be necessary, and a clear lack of some very important elements… namely, a shit ton of fresh dill.

Unintimidated (and having made borscht, or some hodgepodge version of it before), I set off to re-create Great Gram’s Beet Borscht.

Here’s what I did/an example of how bad I am at writing soup recipes:

Remove the stems + greens from the beets and wash thoroughly. Cut up.

Wash beets and cut in half or quarters.

Add the beets + stems + greens + onion +garlic to a pot of water and bring to a boil. The water should cover all of the beety goodness by about 2″ it might end up being about 8 cups but I can’t be sure because I paid no attention. You’re basically making the base for a broth while also cooking down the beets.

Boil the beety goodness until the beets are tender (check with a fork). Remove the beets, set aside and peel (the skins should just peel right off). Add a tablespoon or two of chicken or vegetable stock to the pot with the stems, greens, onions, and garlic… this just kicks up the flavor and adds some saltiness. I put “Caldo de Pollo” in every soup I ever make because I am a really good vegetarian.

Stir + strain the broth, reserving all the liquid and discarding the mushy stuff. Bust out your Ninja Blender and add the broth (6-7 cups). Chop up some fresh dill (I swear I use like 1/2 cup of dill… add as much or as little as you want) and add to blender.

Now you get to decide how much buttermilk and sour cream to add. I add probably a cup of buttermilk and 3/4 cup sour cream and mostly go by color which I feel is a good way to feel it out. Start off with smaller quantities of dairy and add more to your liking.

Once you have skinned/peeled the beets, Cut up 2 of the beets into small 1/2″ chunks and set aside. Take the remaining beet and cut up into manageable chunks to throw in the blender. Rev that Ninja up and blend until smooth. Remove the liquid beet goodness from blender, add beet chunks and chill to serve. 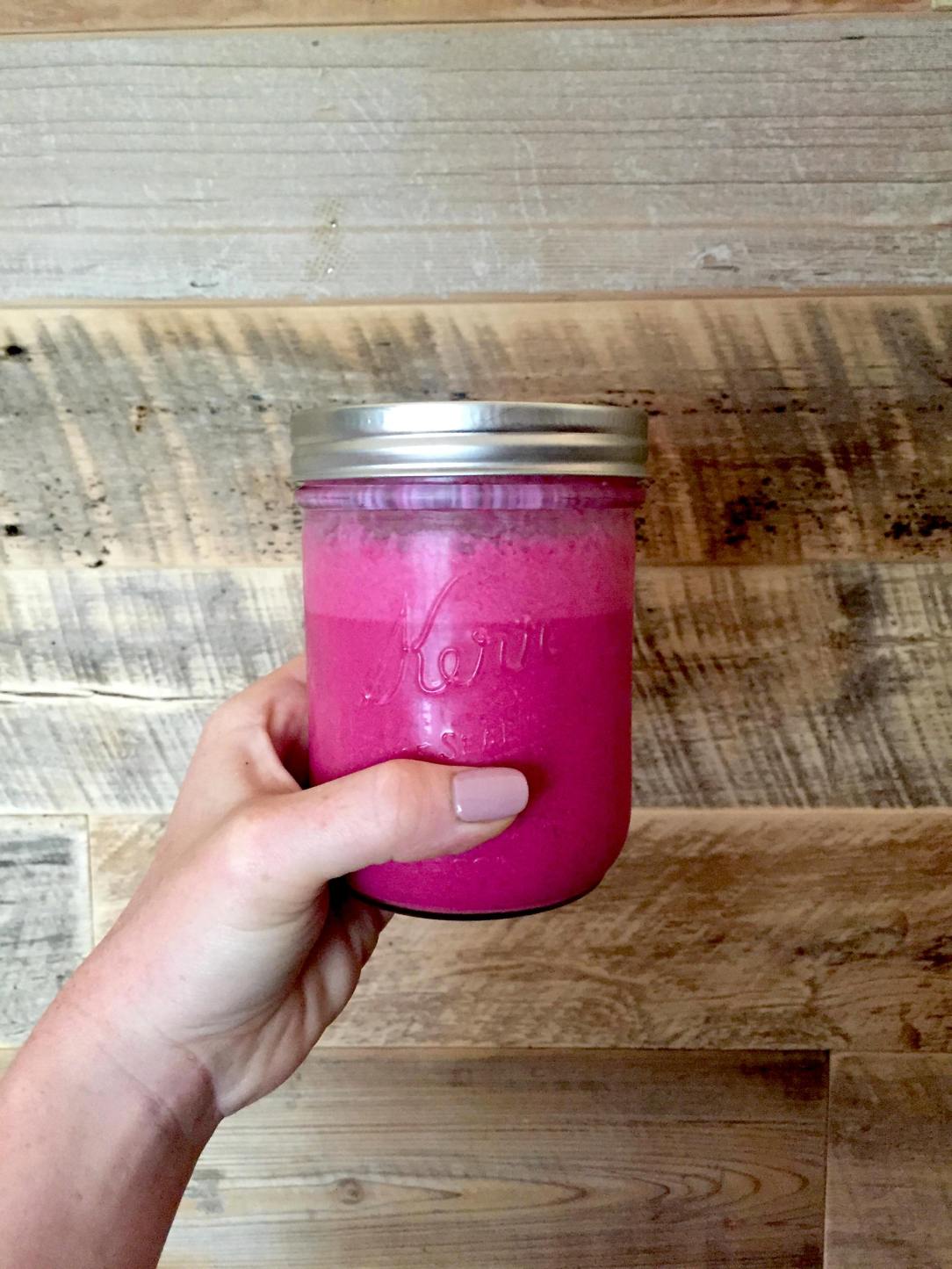 I like to store my borscht in mason jars for easy access so I ration out the 1/2″ chopped beets amongst 4 regular sized mason jars and then top them off with the blender mix.

When it is time to serve I either just drink right from the jar (no joke) or pour into a bowl like a civilized lady and top with sour cream and more dill.

Another cold summer soup that I love is chilled cucumber soup. It’s like borscht’s cousin. I’ve been making this stuff for years but don’t have a recipe for it (of course) so I tried my best to make one to share with you but I’m not making any promises here, people. 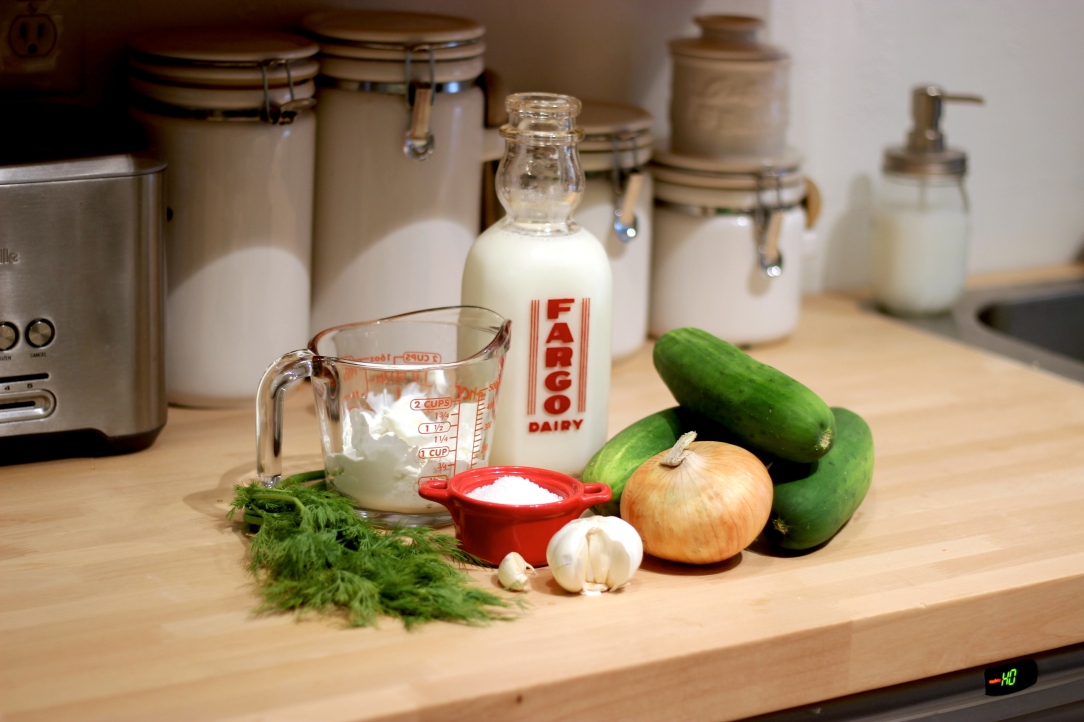 Peel your cucumbers and cut into 2″ chunks (just to be more blender friendly). Cut up your onion and garlic into smaller chunks as well and mince your dill a bit.

Add your peeled cucumber, onion, garlic, and dill to a Ninja blender. Top with buttermilk and sour cream. Blend until smooth.

Add salt to taste and chill to serve.

Summer soups are ideal with crusty bread to dip or nothing at all. I love being able to drink lunch on super hot days and both the borsht and cucumber soups are superbly refreshing ways to have a healthy lunch and not feel like you are going to explode.

Volume up. Kids got soul. 🎶
“The days are long but the years are short.” 2019 was both amazing and challenging. Motherhood has a unique way of warping time- some days drag on and on and then milestones flash by your very eyes. I keep this little reminder up on our bathroom mirror with a photo of our family the day after Alden was born. It’s hard to believe he’s already a harmonica playing, art loving, kitty snuggling, dancing machine. This time of year also marks an “anniversary” for Seth and I- we’ve been side by side for 6 straight years ♥️
Oslo the dream cat 🐈 He is king if cuddles, loves to poke his nose around whatever I’m working on, and puts up with Aldens constant smothering with “gentle” pats and loving head butts.
Made a few of these #bombazinemitts for Christmas presents this year using a #qayg method. Each was lined with #upcycled shirt material and I love the way they turned out! #bombazinemitt #handmadechristmas
♥️❄️♥️
This year’s Christmas #potica 😍 Every year I learn something new when I bake this special treat. This year I took a little inspiration from babka and folded the long roll into a loaf pan. I know eventually I will settle on a recipe and method I love and I look forward to passing that down to the next generations.
%d bloggers like this: